Edit
watch 01:36
We're Getting Mutants in the MCU - The Loop
Do you like this video?
Play Sound

"Why are you trying to kill me? Your mother is dead, and now you want to avenge your father, the fool who tried to kill you? You two are fools, just like him!"

Eva (エヴァ Eva?) is the main antagonist of THE OneeChanbara 2 and its update title THE OnēChampon / Zombie Hunters 2. She is the instigator of the second zombie incident, having unleashed zombies in Japan with the intention of breaking the seal on Saki's Baneful blood.

Eva returns in OneeChanbara ORIGIN as the main villain once again but is also given a deeper backstory. This incarnation of Eva is voiced by Yūko Kaida, the original voice actress of Aya.

Eva is an attractive and voluptuous woman with green hair wrapped in a long ponytail. When Eva enters Blood Rampage, her hair turns silver.

As a weaker member of the Baneful Bloodline, Eva was mocked and looked down upon by the rest, leading to her despising them all. She bore a child to a man she didn't choose, awakening both her hatred and her power. In a fit of jealous rage, Eva killed Oboro's beloved wife Tsubaki. Although she gained tremendous power from devouring Tsubaki's heart, she also contracted an incurable disease that would end her life soon. Not wanting to die before properly raising her daughter, Eva sought to increase her power by devouring the hearts of other Baneful members.[1]

Aya, Saki, and Reiko reach the end of the abandoned temple to arrive in an open area with a stone pathway leading to a circular arena above water. In the middle of the arena is Eva, the mastermind behind the second zombie incident. When Saki inquires as to why Eva targeted her with her zombie minions, Eva explains that she intended to break the seal on Saki's blood, forcing Saki to rampage which would lead to Aya and Saki fighting and killing each other. Eva would then be able to take Saki's blood, which holds tremendous power, all for herself. Realizing that her plan didn't go as expected, Eva brushes it off, content with finishing Aya and Saki off herself. Reiko then enters the conversation, telling Eva that she won't receive an easy victory fighting against three opponents at the same time. Eva recognizes Reiko as part of the "group of sewer rats" trying to unlock the secrets of their Baneful Blood. Finally, Eva readies herself to fight against Aya, Saki and Reiko.

Eventually, Eva is defeated and killed by the three girls. Just as Aya and Saki are taking a breather after the battle, Reiko walks up to Eva's corpse and thrusts her hand into her chest, retrieving Eva's Baneful heart. Although Aya and Saki are perplexed by Reiko's actions, Reiko devours the heart, gaining tremendous Baneful power. Aya and Saki are forced to fight the empowered Reiko.

After murdering Tsubaki, Eva gained tremendous power from devouring her heart. Using this newfound power, Eva makes telepathic contact with a grief-stricken and vulnerable Saki, brainwashing her into thinking that her father killed her mother and that it was because her father cared more for the daughter he had with his previous love: Saki's half-sister Aya. Eva then convinces Saki of a way to resurrect her mother: by using a Baneful member's heart. To prepare for this, Saki takes up the sword and trains for two years with Eva supporting her endeavor by creating apparitions of Oboro and Aya for Saki to train against.[2][3] Eva also informs Saki of the tradition of Baneful sisters to fight each other to the death.[3]

Two years later, during which Eva likely killed other members of the Baneful Bloodline and devoured their hearts, she reanimates Anzu and Sayaka, giving the sisters the order to kill Aya.

After Sayaka is killed by Aya, Anzu returns to Eva, who tells Anzu that she can resurrect her older sister if she retrieves Aya's heart. Anzu however is later killed by Saki, causing Eva to ridicule her uselessness.

After being so hidden and elusive for so long, Eva is found at her hideout and challenged by Oboro for killing his wife and hurting his daughters. Despite claiming that Eva was still weak no matter how many Baneful hearts she consumed, Oboro is unable to defeat Eva, instead becoming Aya and Saki's final obstacle before their decisive battle with Eva. Upon the vanishing of Oboro's body, the doorway to Eva's arena becomes unblocked, allowing Aya and Saki to pass through and finish what their father started.

Aya and Saki arrive at a circular arena above a lake seemingly created within a valley. In the center of the arena stands Eva, the woman who destroyed their family. Upon noticing the sisters' presence, Eva concludes that Oboro finally died and remarks on the depressing fate of men of the Baneful Bloodline to descend into madness. After that, she voices her wonder at Saki standing by Aya's side as if she never tried to kill her older sister. In response, Saki places blame on Eva, while Eva calls her foolish for believing her words. Angered by this, Saki declares that she will kill Eva. An amused Eva laughs heartily, after which she states that she must survive and that she will devour the girls' hearts. Aya and Saki ready themselves, intent on avenging their parents. Eva in turn summons her sword and begins the battle by lunging towards them.

During the battle, Eva mocks the deaths of Oboro and Tsubaki and claims Aya and Saki to be foolish for trying to avenge their father who had just tried to kill them. Unfazed by this, Aya declares that she is proud of their father for fighting and dying for the ones he loved. Although Eva calls this pointless sentimentality, Aya reaffirms that she and Saki will fight for those who can't defend themselves. Halfway through the battle, Eva enters Berserk Form to try and gain the upper hand on the sisters.

Eventually, Eva is knocked to her feet, her weapon thrown into the water and pendant removed from her neck and on the ground. Exhausted, Eva strongly grasps the pendant, stating to herself that she can't die yet. All of a sudden, Lei unexpectedly shows up and walks up to Eva, taking her by surprise. Lei lifts Eva by the neck and plunges her hand into her chest to remove her heart. Eva screams in agonizing pain as Lei removes her hand from her chest and is thrown into the lake, but not before being shot in the forehead from Lei's gun, seemingly being killed in the process.

In THE OneeChanbara 2, Eva was nothing more than a typical villain seeking to attain power from Saki's blood. She was a scheming woman who looked down on her enemies.

In OneeChanbara ORIGIN, Eva was given a deeper backstory and thereby a more nuanced personality. Eva was capable of showing care and affection to vulnerable individuals such as Saki. However, this particular instance was a facade. Eva held hateful spite for anyone of the Baneful Bloodline. She killed Tsubaki out of jealousy and held no remorse for how her actions affected Oboro's family. She ridiculed Anzu for her uselessness after she was killed by Saki.

However, Eva was not entirely evil. The motivation behind her orchestration of ORIGIN's events was to raise her daughter. Eva loved her daughter dearly, as evidenced by the pendant she wore, an identical copy of her daughter's.[1] Before Eva was killed by Lei, she grasped her pendant strongly, stating to herself that she can't die yet (for her daughter's sake). 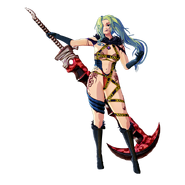 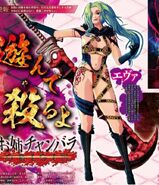