"What happened to all that swagger!?"

Kagura (神楽 Kagura?) debuted as the protagonist of Onechanbara Z: Kagura before starring alongside her half-sister Saaya and series protagonists Aya and Saki in the second to last OneeChanbara title, Onechanbara Z2: Chaos as the headlining frontwoman. Miyuki Sawashiro voices Kagura in Japanese while Amanda Celine Miller provides her English voice.

Along with her sister Saaya, Kagura is a half-Vampiric, half-Baneful warrior of the Vampiric Clan. She enjoys the thrills of facing off against strong opponents and dresses in a cowboy hat and a bikini specifically to taunt Aya.

Kagura is a half-breed born of a female Baneful and a male Vampiric. The name "Kagura" came from her mother, who was Japanese. She and her sister, Saaya, were both warriors close to Carmilla, the Queen of the Vampiric Clan. However, once they found out they were nothing but pawns to her, they both revolted.

Kagura's skills have accumulated through multiple battles and as a result, she has destroyed most of the core Vampiric Clan, Carmilla included. This leaves Kagura near the front of the line for the throne, but her sole concern now is defeating her rivals Aya and Saki.

Her swimsuit-type outfit was originally worn to taunt Aya, but now serves as a sort of trademark for her.

Born of a male Vampiric and a female Baneful, Kagura and Saaya's father was executed by Carmilla for his involvement with members of the Baneful Bloodline. However, Carmilla saw potential in the half-sisters and reared them to be elite warriors of the Vampiric Clan. The name Kagura was given to her by her Japanese mother.

Kagura was separated from Saaya when they were little, but help from the Bullard Foundation allowed them to reunite. Kagura's Vampiric blood saved Saaya from an inability to control the unusually powerful Baneful side of her half-breed blood by stabilizing her blood's balance.

While the sisters were being brought up by Carmilla, they were taught that the Baneful Bloodline was the nemesis of the Vampiric Clan, so Kagura and Saaya took part in the hunting down of Baneful members. Kagura, however, did not care for the clan's motives, choosing to fight for the simple reason of encountering strong opponents. She and her sister were loathed by fellow Vampirics for their half-breed blood, but she never particularly minded.[1]

For the sake of world peace, Kagura and Saaya were sent on a mission to Japan to quell the latest zombie outbreak and eliminate Baneful sisters Aya and Saki, the ones who caused the outbreak.

Kagura is usually playful, overconfident, cocky and lives for the thrill of the fight more than anything else. When bored, exasperated or taunting enemies, she sometimes incorporates what little English she knows into her dialogue, resulting in lethal displays of carnage laced with bits of broken English. This is reversed in the English dub, where Kagura instead weaves in phrases in Japanese amidst her primarily English dialogue. This become a staple of her character. Despite being an incredibly natural and intelligent fighter, Kagura has been known for her rather unremarkable knowledge and terrible couth when it comes to electronic devices any more advanced or specialized than a cellphone. As Saaya would note, all gadgets that her sister touches will explode almost instantly. 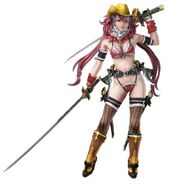