"Do you really think there's a way for both of you to survive? I'm telling you. There's not. That's the deal with sisters... They're compared to each other from birth. Competition is their destiny!"

Reiko (レイコ) is a major character in the OneeChanbara series, serving as an antagonist and sometimes as a playable character.

Reiko as encountered by Aya and her party from time to time is in fact no single-person but clones of a scientist that is working to unlock the secret behind the zombie outbreak since its beginning. The clones at first were created for the original Reiko to experiment on with the Baneful Blood and presumably meant to be expendable. This has apparently changed later when, in order to more-efficiently carry out her will, the original Reiko wired herself into a computer network and began developing more-sophisticated clones to serve as her eyes and ears in the field. These new generation of clones, benefiting from progress made on Humanity's understanding of the Baneful Blood descendants (for example, excessive exposure to the Baneful Blood triggers "berserk" reaction on them instead of outright killing them), are divided into two categories: the "Single Digits" model, the nine clones based on the original Reiko, and the mass-production model, simplified versions of the "Single Digits" model. All clones have been genetically enhanced for their specific functions, but only the "Single Digits" model is capable of the full-range of investigative tasks from intelligence gathering to self-defense combat. Also, all nine Single Digits clones are telepathically linked to one another and the original Reiko.

It is suggested that all Reiko clones defeated before the events of Bikini Zombie Slayers belong to the mass-production model: when Saki suspects the opponent of using sheer numbers again upon encountering a Single Digit clone during the events of Bikini Zombie Slayers, the clone reminds Saki not to confuse her for the mass-production cheap thrills; after defeating the clone, Saki remarks that for the first time ever she felt evidences of humanity from the clone.

The Wii console installment also has an unlockable story arc featuring Reiko №9, one of the Single Digit clones, as the protagonist. It paints both the original Reiko and her clones in a more positive light, stating that despite extreme methods that have put her clones in conflict with Aya and Saki, Reiko's true aim is not only to wipe out the undeads but also to prevent the Baneful Blood descendants from turning against the living afterward. As she sets about capturing identified carriers of the Baneful Blood, however, the clone is able to observe genuine love between Aya and Saki as well as their hope for the future, prompting the collective consciousness of the original Reiko as well as the surviving Single Digit clones to re-evaluate their methods with the hope that Baneful Blood descendants might yet be able to co-exist with the rest of Humanity after all. Reiko №9 possesses an alt-attack mode that grants her the use of firearms and comes equipped with a semi-automatic shotgun and a submachine gun. She becomes available upon completing Aya's story arc.

[Rough Translation] A fellow hunter of undead spirits, she contacted Aya and offered her service as an information dealer.

In return for Aya exterminating the undead at her behest, she passes along any clue that comes her way as to the possible whereabouts of Aya's family and is therefore treated as a full partner by Aya. Such exchange of information is carried out by means of long-range communications.

Most aspects of her remain mysteries.

However, she appears to have sisters of her own.

Another Undead Hunter who contacts Aya as an informant. In return for Aya hunting down the Undead based on Lei's intel, Lei looks for intel on Aya's missing family members as a business partner. Lei contacts Aya and issues various instructions. Aya knows almost nothing about Lei's origin, and mysteries still abound. One thing Aya does know, however, is that Lei has sisters. Her identity or background are unknown, except that she seems to have sisters. Later it is revealed she is a clone just like the original story. However the main difference is rather hunting Aya and Saki under the Organization's order, she defects and killed all of her fellow clones. After Aya and Saki defeated Eva, she appeared before them, ripped Eva's heart out, threw Eva over the lake but before she reached the water, Lei killed her with a headshot. Laughing manically, Lei expresses her admiration towards Aya but also criticize her for letting herself fooled. With a desire to become like Aya, Lei consumes the heart and drive to a frenzy, engaging Aya and Saki in combat. After being defeated, Lei dissipate into the sparkles but not before showing one last admiration towards Aya.

A mysterious woman covering her face, Reiko is arrogant and wants power of the cursed blood for herself.

The scientific technology of The Organization has realized perfect of cloning. Their techniques are being used to create an endless army of clones. Reiko is the source of these clones and she has direct control over them.

In their previous struggle it appeared that Aya killed Reiko. However Reiko survived due to the blow begin administrated with the back of Aya's sword.

Initially posing as an ally to Aya and Saki, Reiko is a loyal member of The Organization. She is an arrogant woman who sees Aya and Saki as nothing more than test subjects for her research and experiments concerning the Baneful Blood.

In Reiko's story mode for Onechanbara: Bikini Zombie Slayers however, she is presented in a more sympathetic light, questioning the original Reiko's intentions regarding her research into the Baneful Blood and wishing to save everyone, including a Berserk Aya and Saki, from human extinction.

In Onechanbara SPECIAL, Reiko, although having lost her memories, is initially hostile to Aya but reluctantly joins her party to find a way to recover their memories. According to Himiko, Reiko has a habit of "running her mouth."

Reiko was re-imagined significantly in OneeChanbara ORIGIN, being renamed "Lei" as a result. Lei is initially presented as a friendly and helpful contact to Aya as the latter searches for her missing family members. Lei would openly express her fascination with the Baneful Blood and its heirs and she would often ask personal questions of Aya as shows of curiosity. It is later revealed that Aya similarly asked personal questions of Lei, such as her likes and dislikes, to which Lei felt was "kinda nice." When Aya goes to stop Saki, Lei shows genuine concern for her safety. Lei also has a teasing side as shown when she teases Aya about not being good with machines. Her teasing is a bit more aggressive towards Saki as shown when Lei persistently calls Saki "Dear Saki."

Behind Lei's friendly and teasing disposition however is an unstable and contemptuous personality that curses the purpose of her whole existence. Born as a clone and forced to fight and kill other clones that shared her visage, Lei quickly abandoned her thoughts about her fellow clones as "sisters" and instead adopted a "dog eat dog" mentality, seeing the other clones as nothing more than trash.[1] This is clearly demonstrated when she chortles from hearing Aya describe the corpses of clones slain by Oboro. Being subjected to many combat tests, Lei viewed the tests as sick pleasure for the tester and promised to kill the tester one day.[2] Although Lei was initially friendly to Aya, she in truth viewed Aya as a sort of plaything, believing that Aya would be forced to fulfill her bloodline's deadly tradition of fighting her sister to the death, perhaps assuming that Aya shared a similarly cruel destiny as herself. When Aya managed to stop Saki without killing her however, Lei was inspired to break away from her own fate, leading to her slaughtering her fellow clones and destroying Uroboros. Unfortunately, Lei hated her own existence so much that she wished to become a person like Aya, in turn devouring Eva's heart and gaining Baneful power for herself. Aya however saw through her, understanding her sadness and fought Lei to the death. It was thanks to Aya that Lei finally accepted herself before disappearing. 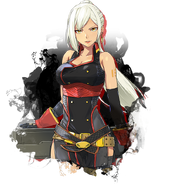 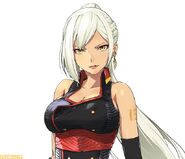 Reiko in "All Star Fighters"

Lei engaging enemies with her shotgun

Lei readies herself for melee combat

Lei vs Aya and Saki