"With the Tsubaki-style mortal combat skills I inherited from my mother...I will kill you!"

Saki (咲 Saki?) is the deuteragonist of the OneeChanbara series, initially debuting as the antagonist of the first title before partnering with Aya in subsequent entries. She has appeared in every OneeChanbara title with the exception of School Girl/Zombie Hunter. She is currently voiced by Hiromi Igarashi in Japanese and by Cristina Vee in English.

Aya's half-sister, who bears the direct bloodline of the Baneful's head family. Though she once stood opposed to Aya, even going so far as to unleash the undead throughout Japan, she's since come to understand and even appreciate her former rival. Additionally, she's gained skills very much on par with Aya's (perhaps even greater), thanks in part to her Baneful Bloodline.
Currently, she is a member of the U.S. Special Forces' Z.P.F. division, alongside Aya. As the mastermind behind the first undead incident, she is regarded as the world's most dangerous person, which means she's under near constant surveillance -- but she seems not to mind.

In Onechanbara Z: Kagura, Saki finds herself being once again blamed, this time along with her sister Aya, for a new wave of zombie epidemics and targeted by the Vampirics for assassination.

Saki is a girl of the same bloodlines as Aya. She is more susceptible to the effect of her blood than her sister. Her fragile frame harbors a highly conflicted personality. One minute she is a determinated assassin taking an assassination work without a second thought, and later she is a regular girl struggling to express her skill to her sister.

Aya's younger half-sister and descended from the same cursed bloodline, Saki is said to be even more vulnerable to its berserk state, suggesting that her mother might also be part of the bloodline while Aya's mother not. In pursue of swordsmanship, however, their father eventually left Saki and her mother to fend for themselves, which makes Saki resent her father and ultimately drove her to assassinate him after watching her mother dying in illness and poverty. Later Saki discovered an ancient artifact that allows her to use her demon powers which further proceed her desire to become stronger . This results to the story of the first OneChanbara , which ends with a climatic battle and her defeat at Aya's hands. Aya however, chose to live alongside her sister peacefully.

In the main scenario, Aya and Saki were declared "Missing In Action" by the Z.P.F. Following Aya's lead, Saki also decided to start operating independently from hereon out, as both were weary of organizational protocols.

They were also marked for assassination by the Vampiric Clan and were being pursued by Kagura and Saaya until the four double-crossed by Vlad in the middle of their clash in Babel Tokyo.

In the alternate DLC scenario, Saki accompanies Aya to Babel Tokyo in a Z.P.F. mission and runs into a robot copy of herself which they end up pursuing.

Like her sister, Saki maintains a toned and conventionally attractive body, though unlike Aya, she doesn't particularly care for showing it off. Perhaps in line with said juxtaposition when it comes to their appearances, Saki's frame is rather subdued in comparison with her sister's and despite being extremely toned, slender and (despite her stature) very lean, is still overall very petite. Saki has hip-length jet-black hair, almond shaped, amber-colored eyes, lightly tanned olive skin, A-cup breasts, full, pink lips and and just like her sister, a beauty mark under her left eye. Whether on mission or not, Saki tends to favor wearing some manor of skirt or dress, be that her one of her high-school sailor uniforms (one having a white collar, thigh-high stockings and sporting a blue sweater and the other being white mid-riff bearing version with a blue collar) or a frilly, gothic lolita dress complete with fishnet thigh-high stockings, garter-straps, a headband and high-heels. 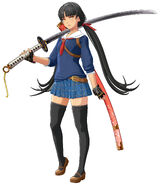 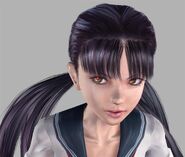