Edit
watch 01:36
We're Getting Mutants in the MCU - The Loop
Do you like this video?
Play Sound

Xtasy (忘我 Bōga, Ecstasy) and Dare Drive (デア・ドライブ Dea Doraibu) are demonic and bestial transformations harboring immense power, attainable by Banefuls and Vampirics respectively. These transformations were introduced in Onechanbara Z2: Chaos while Xtasy made a return in OneeChanbara ORIGIN.

Historically, Xtasy had been known as a Baneful transformation long thought to be the stuff of legends, while Dare Drive was a Vampiric transformation thought only attainable by a pure-blooded vampire like Carmilla.

It was not until the present day that Evange, along with the reluctant aid of Carmilla, conducted research to find the key to stimulating Banefuls' and Vampirics' blood in the hopes of sparking a premature evolution into these powerful transformations. Unlike Carmilla who wished to keep the Vampiric Clan's blood pure and completely wipe out the Baneful Bloodline, Evange sought to usher in an idealistic world ruled by powerful Banefuls and Vampirics alike. Her research into unlocking the secrets of Xtasy and Dare Drive was the key to her world domination scheme.

As part of her research, Evange experimented on Misery (who she called Misha) day in and day out until Misery attained her Xtatic Form.[1] To force her own Xtatic Form to manifest, Evange had confronted Carmilla before the events of Onechanbara Z2: Chaos.[2]

Despite Dare Drive being thought exclusive to full-blooded Vampirics, half-Vampirics Kagura and Saaya attained their Dare Drive transformations by draining the Baneful blood of Aya and Saki respectively.[3][4] Aya and Saki later attained their Xtatic Forms via the Vampiric toxins from Kagura and Saaya's bodies, sparking a premature evolution into the mythical Baneful transformation.[5][6]

In OneeChanbara ORIGIN, Aya and Saki were able to attain their Xtatic Forms purely through sustaining much physical and emotional trauma. Oboro, subject to the fate of male Banefuls to go mad and having stemmed his Berserk Baneful blood for two years, finally reached his limit at Eva's hideout and unleashed his Xtatic transformation, a form reminiscent of a demonic samurai.

The ability of this transformation is ensuring their uncontrollable hidden powers as well as giving new form similar to demonification, eradiating an immense aura base on the power type of an user. Boosting their speed and power to abnormal heights and decimates their foes into dust. 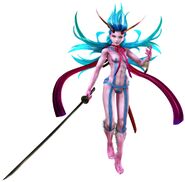 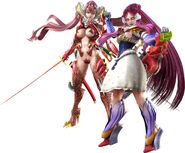